The researcher with a thousand lives

“One only has one life to lead!”, regrets Darius Farman, a researcher with the liberal think tank Avenir Suisse, in a moment of alert relaxation during a walk along the quays of Ouchy, in Lausanne. To ease this frustration that has haunted him since his early childhood, he was to opt for multidisciplinary studies, embark on a career as a think-tank expert and develop a passion for theatre. He has proudly joined the Swiss Young Academy, where he is keen to contribute his expertise in order to study the role of science in the Swiss legislative process.
Author | Kalina Anguelova 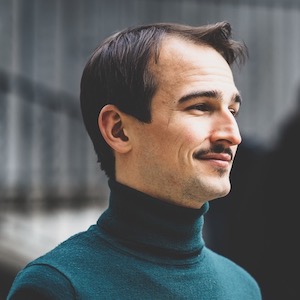 His greatest frustration is that he has only one life. So, he has taken up theatre: “There you have the power, for a short while, to step outside of yourself, to imagine the infinite possibilities.” He makes a big gesture to encompass these “possibilities”, and he will do the same when he talks about Europe, one of his other lives. In the icy cold of this April Monday, Darius Farman, looking gentle, modest and convinced at the same time, explains how he tries not to let himself be locked into a single definition: “That’s why I like being a member of think tanks: their role is to break down barriers between disciplines.” Behind his reserved appearance, one can detect in this native of Lausanne an eagerness to do things well, coupled with a desire to understand everything – quickly – and a need to decipher all the global challenges facing our societies, without leaving anything to chance.

Aged 28, Darius Farman is both a researcher with the liberal think tank Avenir Suisse and vice-president of the Swiss foreign policy forum foraus.  “I’ve always been attracted to multidisciplinary approaches.” His current research, at the crossroads of politics, economics and law, focuses on the evolution of Swiss industry over the last twenty years, European politics and the challenges of digitization: “Think tanks are bridge-builders between science and society, an interface that connects, an interpreter who translates different languages:  those of science, politics, the media and even of the general public.” Getting excited, he says: “In an increasingly complex world, they help to ensure that the major decisions facing society incorporate as much as possible the thousand and one facets of this complexity, and first and foremost the results of scientific research.”

It is precisely this expertise that he wishes to contribute to the Swiss Young Academy. In early February 2020, he embarked on a research project with three other members about the role of science in the legislative process. “We will examine how parliamentary committees and groups choose their experts and how those bodies incorporate scientific expertise. The transfer of expertise between the scientific and the political worlds is extremely important in a society in which political issues have become highly complex.”

The researcher was proud to join the Swiss Young Academy, while admitting he was apprehensive at first: “It was very intimidating to find myself with 28 members, almost all of whom already have a doctorate.” A doctorate? “I’m not ruling it out, but that will come later.” Instead, he preferred to opt for a second, more career-centred Master’s degree in European political and governance studies at College of Europe in Bruges (BE). The latter helped him to join the European Free Trade Association (EFTA) in Brussels from 2018 to 2019.

“We will examine how parliamentary committees and groups choose their experts and how those bodies incorporate scientific expertise.”

Passionately interested in European issues and a fervent defender of the bilateral track – which he sees as a defence of our freedoms and a means to overcome the challenges of the century together – he speaks of them very emotionally. “One can be critical in a thousand ways of what the building of Europe has become. But Europe is an unprecedented historical wager that deserves our attention”. He marvels, like a child in front of his/her favourite toy, at “this peaceful construction of a level of governance above the States, respecting their differences, but with rules describing a common understanding of what are ultimately global issues.”

The specialist in European affairs ends his plea with an anecdote. During his studies at College of Europe, he had the privilege of organizing a grand cultural evening to mark May 9th. A day that probably doesn’t mean much to 99% of the population but which is symbolic for the students at the College. “I took the initiative of staging ‘The Arsonists’, a play by Max Frisch. It’s a kind of theatrical counterpart to Hannah Arendt’s philosophical theories on the banality of evil. It was important to me to show, on this Europe Day, that even though Switzerland does not participate in the political Europe, it’s a country which, culturally, through its history, culture and values, is fundamentally European.”

He has been engaging in theatre and theatrical improvisation since he was a teenager. “At the time, it was therapeutic. It helped me to overcome my shyness.  Today, it allows me to explore several lives.” One can feel the central role that culture plays for him. The day after the meeting, he continued the dialogue by e-mail with these magnificent words from Saint-Exupéry: “We have barely begun to live in this new house, which we have not even finished building.”

(2018) Postgraduate MA in European Political and Governance Studies, at College of Europe, Bruges (BE) with a SEFRI scholarship

(2017) MA in Comparative and International Studies, at the Swiss Federal Institute of Technology Zurich

(2015-2018) Administrative assistant in the EMC & DES laboratories at EPFL, Lausanne